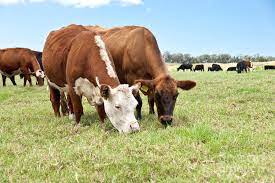 Anaplasmosis is one of the most serious blood-born diseases of cattle and causes significant disease loss to beef producers in the United States. In fact, economic losses are estimated to exceed $300 million annually due to factors like lowered productivity, infertility and abortions, a drop in milk production and animal death.

The disease occurs when red blood cells are infected by the Anaplama marginale microorganism. Although an animal’s immune system will detect and remove these cells from the body, it can’t create new red blood cells fast enough to replace the infected ones that are lost. As a result, the animal becomes anemic. This leads to lower oxygen-carrying ability and causes clinical symptoms. Usually you’ll first notice an anaplasmosis-infected animal when it weakens and lags behind the herd. Other symptoms can include:
Typically adults 2 years and older only develop clinical symptoms, as younger animals rebuild red blood cells fast enough to avoid anemia. The disease’s incubation period averages about a month, but can range anywhere from 6 to 70 days. Affected cattle either die or begin a recovery 1 to 4 days after the first signs of the disease. Anaplasmosis can be spread at any point during the season, but clinical cases are most common during the late summer and early fall when transmission threats increase. In addition to being spread by biting insects, it can also be transferred via contaminated needles and surgical equipment. Thus, using a new needle and sanitizing equipment between animals is strongly recommended.

Cattle that recover from anaplasmosis usually develop immunity, but they’ll continue to be a vector of the disease. The same holds true for animals that contract the disease when they’re young, but never show signs of it. For that reason, it’s important to utilize parasiticides and incorporate a feed-grade chlortetracycline (CTC) product in your herd’s feed or mineral supplements.

At Countryside Feed, we carry Aureomycin®* – one of the top broad-spectrum antibiotic supplements in the industry. In addition to controlling active anaplasmosis infections, Aureomycin is also effective against a wide range of respiratory and enteric diseases like bacterial pneumonia caused by Pasteurella, and bacterial enteritis caused by E. coli.

Aureomycin* is labeled for control of active infection of anaplasmosis in cattle over 700 lbs at a daily level of 0.5 mg/lb of body weight/day.

As the chart at right shows, suckling calves experienced an average weight gain of 21.6 lbs** over the control when cows were supplemented with Aureomycin across university trials in five different states. A 2004 study by Kansas State University*** showed that adding Aureomycin mineral supplement to a cow’s diet led to an increased weaning calf weight of 19 lbs, a 2 percent increase in pregnancy and reduced medicine and labor costs, resulting in a net profit of $47/head.

Controlling anaplasmosis can be a challenge, but fortunately you have a team of experts on your side to help you navigate the decision-making process. If the disease is a concern in your operation, consult your local veterinarian and your Countryside Feed nutritionist for assistance in creating the right diet plan for your herd. They’ll assist you every step of the way.


* Note: As a veterinary feed directive (VFD) drug, medicated feed containing Aureomycin must be used by or on the order of a licensed veterinarian.

Jan 24,2023
Total digestible nutrients (TDN) are the common energy reference for both feed content and animal requirement, so how are the two connected and what can we know to better examine TDN of feedstuffs and use energy economically?
Jan 09,2023
While it is true that carcass traits and beef product attributes are largely influenced by the genetic decisions of seedstock and commercial cow-calf producers and the feeding decisions of feedlot managers and nutritionists, the animal health decisions made by producers and veterinarians throughout the production chain also play a role. A number of studies have indicated that muscling, marbling, and tenderness all can be negatively impacted by cattle health problems.
Dec 06,2022
Although it's usually energy and protein intake thats emphasized when planning winter cow nutrition, ensuring adequate vitamin A intake is also important. Vitamin A is the vitamin most likely to be deficient in cattle diets and is the only vitamin with a well-defined requirement. It is important for vision, bone formation, growth, reproduction, and skin and other tissue health.