Ask the Expert Beef > What To Do With High Nitrates?

What To Do With High Nitrates? 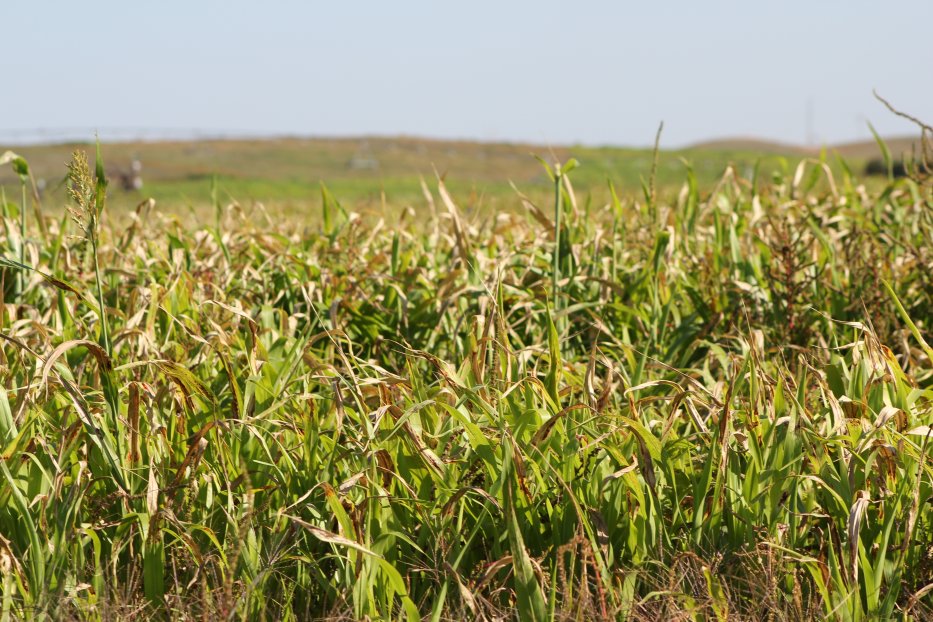 Given the drought conditions in some locations this year, many producers may be asking themselves how to handle the annual forages they have standing in the field that may not have grown as much as would be expected under normal conditions. These drought stressed forages can be high in nitrates and may be potentially toxic to cattle.

So, what are the options?

Grazing the forage. Most recommendations for the level of nitrates in forages that cause issues are based on hay and it is suggested that levels above 2,100 ppm N03-N are toxic. Often grazing cattle can tolerate greater concentrations of nitrates than those consuming hay. The amount of nitrates cattle can consume without an issue depends a lot on the situation and management.  If the forage to be grazed is high moisture it is often lower risk. Fresh forages release nitrates into the rumen at a slower rate than dry forages. The slower release rate allows rumen microbes that convert toxic nitrite to ammonia, to better keep up with nitrate inflow. If the forage is mature and dried out, the rate of release of nitrate and thus the risks would be greater, more like hay.

A few things to understand about risks when grazing higher nitrate forages:

Even though the potential for nitrate toxicity exists, careful grazing and cattle management can be used to eliminate cattle losses. Ultimately, the decision to graze high nitrate fields is a judgement call and a question of how much risk one is willing to take.

Another great option would be to harvest the forage as silage. If done right, ensiling can decrease nitrate content of the forage by 40 to 60%. Ensiling is one of the best ways to decrease the potential nitrate toxicity of a forage, so this is an option worth considering. Warm season annuals such as corn, sorghum, sorghum-sudan and pearl millet can all be harvested as silage as can small cereals such as oats, barley, cereal rye and wheat. The nitrate content of poorly ensiled forages will not be decreased to the same extent as well-made silage. Thus, harvesting at the proper moisture (65 to 70%) content and getting the forage packed well are key to ensure the best result. Raising the chopper height can also decrease the amount of nitrates in the silage, as the highest concentrations are usually in the lower stem of the plant. Producers need to let the silage ferment for at least 21 days for maximal effect.  Silage should be sampled and analyzed before feeding to ensure the amount of the silage in the ration provides acceptable nitrate levels in the diet. Producers should target an initial diet content of less than l000 ppm N03-N. Animals can then be adapted to higher levels by slowly increasing the inclusion of high nitrate silage in the diet. Over time cattle can be adapted to consume diets up to 4,000 ppm N03-N.

Harvesting high nitrate forages for hay, an option of last resort? For some situations, hay may be the only option. The drying process does not decrease nitrates and thus, this hay may need to be diluted in the diet with other forages low in nitrates. Grinding and blending of low and high nitrates hay is best to reduce risk.  Additionally, feeding a couple pounds of grain per cow each day can also help reduce risk. If blending of hays is not possible, producers should unroll the low nitrate hay first, then after they have consumed most of the low nitrate hay, roll out high nitrate hay. Be sure animals are not hungry when eating the high nitrate hay (slow intake is key to reducing risk). To adapt the cattle, start by feeding the lowest-nitrate hay and then work up to higher levels. Even with adaptation, feeding hay free-choice is risky when the hay has higher than 2,100 ppm NO3-N. This is because there are likely to be “hot spots” in the hay with high nitrate content that could result in a cow consuming a much higher load of nitrate. Do not feed hay, straw, or fodder suspected of being high in nitrate when it is damp. Damp hay tends to be more toxic because some of the nitrate already has been converted to the more toxic nitrite before being consumed.

Producers with high nitrate forage who need assistance with developing a management plan can contact their local extension educator.

Interviews with the authors of BeefWatch newsletter articles become available throughout the month of publication and are accessible at https://go.unl.edu/podcast.

Jan 24,2023
Total digestible nutrients (TDN) are the common energy reference for both feed content and animal requirement, so how are the two connected and what can we know to better examine TDN of feedstuffs and use energy economically?
Jan 09,2023
While it is true that carcass traits and beef product attributes are largely influenced by the genetic decisions of seedstock and commercial cow-calf producers and the feeding decisions of feedlot managers and nutritionists, the animal health decisions made by producers and veterinarians throughout the production chain also play a role. A number of studies have indicated that muscling, marbling, and tenderness all can be negatively impacted by cattle health problems.
Dec 06,2022
Although it's usually energy and protein intake thats emphasized when planning winter cow nutrition, ensuring adequate vitamin A intake is also important. Vitamin A is the vitamin most likely to be deficient in cattle diets and is the only vitamin with a well-defined requirement. It is important for vision, bone formation, growth, reproduction, and skin and other tissue health.