Go Back to the Basics to Build Next Year's Show String 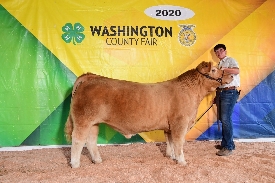 From finishing up the current show season to selecting next year’s show string, this time of year is definitely a busy one for those that show beef cattle. As you head out to look at prospects for next year’s show string, remember to go back to the basics! The best place to start evaluating a show prospect is at the ground! The feet and legs can tell you a lot about an animal and it’s potential. Do the front feed toe in or out? Is there good set to the hocks? What about the natural width of the prospect? How does the animal travel? A calf without a good set of wheels is going to leave you disappointed in the show ring, and for heifers and bulls, in the cow herd where it really matters. Selecting cattle that have plenty of capacity is also important. Cattle are ruminants, so they must be able to eat large quantities of feed to perform. This is especially important in a breeding heifer, in the long run she must be able to carry a calf while still being able to consume enough feed to support herself, the fetus, and a suckling calf! Bulls and steers may not need to carry a calf, but depth of body is an important contributor to a well-balanced animal. The show industry likes a heavy muscled, yet functional animal. When looking at prospects, pay attention to the amount and shape of muscle as these things can be indicators of a calf’s potential. One thing to look out for is condition of a calf. Sometimes it can be hard to see, but that green calf with a lot of shape may have more potential than a calf that is carrying more condition in the fall. A well-balanced calf is much easier to look at. Search for calves that carry their width from the tail head all the way to the shoulders as well as having nice level top lines and under lines. As a general rule, if a calf isn’t balanced in the fall, it’s not going to get better! For example, calves that break behind the shoulder early tend to fall apart as they grow and fatten. Select a calf that looks the part. Females should look like females, bulls should look like bulls, and steers should look like steers! Femininity is important in selecting heifers. Yes, they do look prettier in the ring, but feminine heifers also typically have less problems with infertility and maternal ability than a blocky, masculine heifer. Steers that appear mature, cresty, or overly masculine generally sort themselves out of the top of classes. Bulls on the other hand should show more maturity and masculinity.

At the end of the day, heifers and bulls should be able to transition into the cow herd and steers should have the ability to finish for market. Going back to the basics while selecting show cattle will result in functional cattle in your show string that also serve their purpose in life! For more information on selecting the right calves to add to next year’s show string, contact your Countryside Feed representative!

Aug 03,2020
You have worked hard all year to get your livestock ready for the show ring. Make sure you are ready too!
Jul 09,2020
As you prepare your hogs for the county or start fairs, keep these tips in mind.
Jun 25,2020
Providing a quality base feed for show hogs is important, but custom tailoring feed to each hog in a show string is possible with Purina's line of show supplements.